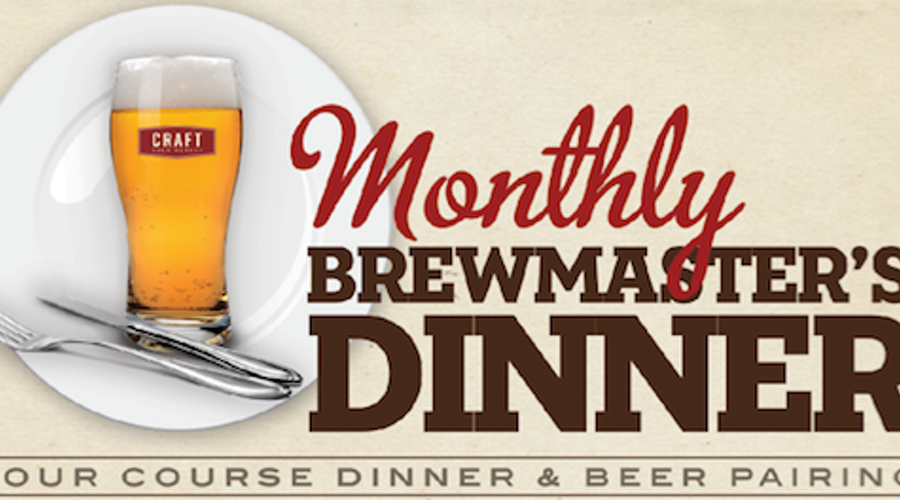 About every month, Craft Ottawa hosts a special ‘Brewmasters dinner’ to celebrate pairing courses of food with excellent drinks – all from a select brewery or theme. For the first time, Craft Ottawa hosted a cider Brewmasters Dinner featuring the ever-wonderful County Cider Company on May 30th 2017. May is Celiac Awareness month, so Craft Ottawa decided to host a completely gluten-free Brewmasters Dinner for those who may normally be left out from the festivities. With cider being naturally gluten-free, it was an obvious choice to feature a dinner using cider for the first time.

Upon arrival to the dinner, was a very generous welcome drink of County Premium Apple Cider. Unsure if the remaining 4 ciders would be this large (yes, they were), everyone was getting primed for the evening with the dry, tart apple cider being handed out. With the dinner being hosted on the upper-level of the restaurant, it featured long, communal tables, so you could sit and meet with fellow cider fans in the process. With a strong mix of people attending – with many of them being young professionals – it was an energetic and friendly group of people from the start (even before being pumped with generous glasses of cider).

Before getting into the first course, Robin – County Cider employee extraordinaire and representative for the company for the evening – spoke about the origins of the County Cider Company; as well as the first two ciders being served. Focusing on the rich history and practices of the company, Robin touched on the tree planting done at the farm, the amount of cider produced every year; as well as the techniques that make County’s cider “more complex than some competitors”.

After Robin’s initial speech, out came the peach cider – all in its golden, bubbly glory. Made all natural with Niagara peaches, it has a clean and sweet finish. But before the first course came out, the head chef for Craft Ottawa wanted to say a few words about the dish and courses in general. The night was about ‘celebrating food people with Celiac can’t normally enjoy”; as well as to celebrate cider. It was admitted that the first dish to be paired with the peach cider was more in favour of celebrating the drink but when thinking of what to pair with it, “prosciutto came to mind”. The first course that was perfectly paired with the peach cider was the ‘marinated burrata” – a  soft cheese, mixed with local prosciutto, roasted peaches, balsamic and a beet drizzle and bitter herbs. The meal and cider paired together, offered a lot of unique contrasts that really complimented each other: the sweetness of the peach cider and roasted peaches was matched well with the saltiness of the prosciutto; the softness of the burrata cheese was well equipped to handle the impact of the crunchiness from the roasted peaches and the meat; and the tartness and the tannin’s of the cider mellowed the bitterness from the herbs. Overall, this pairing was brilliant and the contrasting flavours really did form a superb marriage of tastes in the dish.

Before the second course began, out came the third cider of the evening – the County Pear Cider – with short speeches from Robin and the chef again. Robin went first, describing the properties of the pear cider, stating it was “apple-based with fruit concentrates” and that it is “not as sweet as other perries on the market”. After Robin finished, the chef wet our appetite with a description of the upcoming dish. The second course he designed had both ‘celebrating the cider and the gluten-free aspects of the dish in mind”. With pears being a central part of the dish to be paired with the pear cider, the chef acknowledged between these two courses, “peaches on peaches, pears on pears, hat on a hat” but it all helps to create the vivid flavours in the pairings. The second course involved a gluten-free tart with pears and onions as the filing; with a side salad that featured Roquefort blue cheese and pickled onions. With a gritty pie crust (that was sometimes hard to pick up with a fork) the filing was a very strong caramelized onion taste; with pear being the secondary flavour. These strong flavours went up well against the strong flavours from the blue cheese and the pickled onions – that probably should have been followed with a breathe mint. While the previous dish had contrasting flavours that were at odds with one another, this pear-focused dish had strong flavours that blended more naturally together. With the onions being so dominate, the perry and the pears in the tart, acted to lower their acidity. The cheese was perfect and it almost melted in the mouth when enjoyed directly with the pear cider.

At this point, I was starting to feel the three very large ciders and two courses… we could have stopped there and I would have been very happy, but we were barely only half way through! The breaks between the courses were important and helped to appreciate pondering all the flavours that just happened. I could tell from looking around the room and speaking with a few others, that they were really starting to feel the generous ciders by this point as well, but nobody wanted to stop the journey we were on. The fourth cider of the evening was ‘A Tortured Path’, and with it came a very important speech from Robin. This past January, County Cider tragically lost its creator and visionary, Grant Howes. Robin went on to describe that after a trip to Somerset, UK, Grant fell in love with their premiere style of cider, and wanted to create a version of his own back in Canada. Thus, A Tortured Path was born, and it had been, “Grant’s baby ever since”. A Tortured Path is an old-world cider, that has a dark golden hue and is quite dry from the tannin’s in the apples. Knowing the special value this cider had to Grant and the County Cider Company as a whole, it made it that much more meaningful for the third course. chicken and cornbread waffles – with the 2 pieces of chicken coming in a tiny, silver bucket. Unfortunately for myself, I do not enjoy spicy food so I wish there had been an option without the sauce, but the strong presence of tannin’s in the cider did neutralized my pallet slightly. I would even say that the spicy notes helped to amplify the tannin’s in a way that isn’t as prominent than without the primer. The hot sauce did have an enjoyable smokey flavour however, and the chicken was very juicy. The cornbread waffles were the real star though, being incredibly light, crispy and sticky from the syrup it was glazed in. Despite my discomfort from the spiciness of the chicken I had to eat quickly to get past the heat, the whole dish was comforting and invited a more casual feel to the evening, from the prior, fancier courses.

Approaching the end of the evening, we were presented with our final cider, the County Blood Orange. Before dessert was served, Robin and the chef stood to speak one final time each. Robin admitted she could tell ‘that everyone is really enjoying the cider by that point’ and that the blood orange cider is a dessert cider –  a ‘hit or miss’ to some people. Only available at the County retail store – like the A Tortured Path – I could tell it was a real treat for some who may have never had access to it before. This cider is a vibrant orange-red hue that is sweet, candied and progressive in nature in the mouth. Our final course was a dessert designed to be both deliberately complimentary and contrasting – a burnt orange crème brule that featured a crispy caramel salt on top. This dessert starts off immediately salty but then comes to be a creamy orange ‘creamsicle’ on the pallet. When enjoyed with the cider, the dryness of the drink really brought out the salty flavours of the dessert – including the advertised caramel notes. The brule was both crispy and soft, making it a perfect finish the courses. The blood orange cider was both tangy and sweet, and that left a long lingering taste in the mouth – which stayed well past the tables being cleared.

By the end of this dinner, everyone was rightfully tipsy and deservedly so; and everyone seemed to be friends and very social by this point. Overall, this was a fantastically put together dinner by the folks at Craft Ottawa and County Cider. The meals and the cider pairings were obviously very mindfully crafted to offer a variety of goals and objectives; with value at heart in terms of generous food and drink portions. One of the most thoughtful and appreciated aspects to the night was the commentary between every meal and cider from both the head chef and Robin. Having that knowledge shared really added depth and appreciation for the plates and ciders at hand.

Speaking with others, they enjoyed the night as much as I did – as well as being surprised at how generous every cider portion was. I know from experience and others, it is hard to get people in Ottawa excited about cider when it is a decidedly craft beer town. But events like this really do help to raise the profile of the drink in the city, and I hope to see more not only here, but around the province.

Thanks for the lovely evening, Craft and County – your professionalism, expertise and welcoming spirits will be a night to remember for a long time.

~Bethany for The Cider Crate