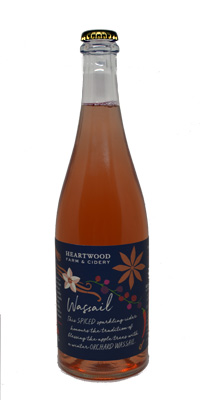 Smell: Strong aroma of mulled spices with cinnamon, cloves, cardamom and all spice hues. Some metallic/woodsy elements.
Initial Taste: Medium bite from spices with a mild kick from the carbonation. Quick and strong presence of spices – especially cinnamon and clove. Slight heat and burning from spices and from an unknown pepper. Oak/wood and maple syrup hints.
After Taste: Spices linger a while. A sour, wild apple comes through – including a mild crab apple flavour. Becomes sweeter with the cinnamon becoming more baked tasting in nature. Semi-dry finish with a deep, wild maple/woodsy flavour.
On ice: Carbonation slightly weakened. Flavour is overall dimmed and it becomes more focused on the spices. Slightly more thin.

Additional Notes: Heartwood’s Wassail Cider is an incredibly full-bodied, flavourful cider that might be best enjoyed outdoors as Heartwood many times serves it. With a strong spice presence, it is warming and tastes like a baked apple pie in the finish. With a hint of wild flavours (including the apple notes), it has remnants of the forest it is brewed in. When heated as per the instructions on the label (with a cinnamon stick and maple syrup) it becomes smoother and creamier – with the spices loosing some edge but a much stronger maple and woodsy flavour. A very authentic mulled apple cider – cold or hot -perfect for cool evenings and winters in general!

The weekend is almost upon us, a long one at that.