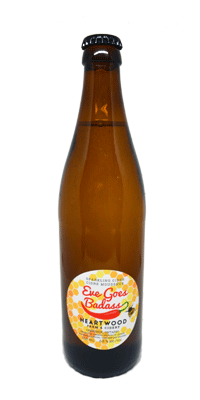 Smell: Mild smell. Faint apple aromas with very faint pepper smell
Initial Taste: Mild bite. Clean, crisp apple – single variety tasting. Quick pepper flavour that builds in spiciness. Mild hints of the honey added.
After Taste: Spiciness lingers but decreases and moves to the throat. Tangy apple flavour continues and slightly mellows out the heat from the peppers. A lot of flavour from the peppers as well.
On ice: Increased carbonation. Ice dulls the spiciness of the cider. Flavour remains mostly the same.

Additional Notes: Eve Goes Badass is unlike other ciders on the market we’ve seen. With a strong heat and spiciness from the cayenne peppers, it adds quite the kick that can even be tolerated by spice-wimps like us. With a tangy apple flavour and a lot of flavour from the peppers themselves, it is a journey to drink this. Trust us, it is stronger than it smells.