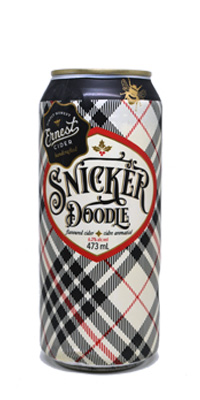 Smell: Strong cinnamon and sweet, pulpy apple.  Some vanilla hints.
Initial Taste: Mild bite. Quick blast of cinnamon and clove, followed by sweet creamy dessert apples.
After Taste: Becomes even more spiced/spicy with the spices staying on the tongue. Lingers a long time. Vanilla becomes more present in the aftertaste. Apple becomes more crisp.
On ice: Carbonation is cut and the edge of the cinnamon is reduced.

Additional Notes:  Ernest’s Snicker Doodle has a definitive desert-like offering, switching between a warm, spiced apple pie and spicy cinnamon hearts.  It is quite full flavoured with dessert-like apples.  Cinnamon drives it from start to finish – strong but not harsh.