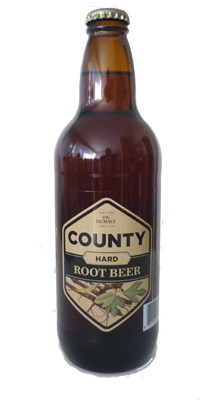 Smell: Strong root beer and vanilla with hints of acidic apple aromas
Initial Taste: Medium bite and foam flavour/sensation that is mainly root beer. Some must and acidity.
After Taste: The apple flavours and typical crisp apple cider characteristics develop. Finishes with the vanilla and sassafras notes lingering in the mouth.
On ice: The ice cuts a lot of the carbonation and foam sensations. The vanilla flavours become more dominant than the apple and sassafras than when you consume without ice.

Additional Notes: When you first sip the cider, you expect it to be like drinking a hard root beer, but it truly is a cider that has root beer elements in it – as the apple is very much still prominent. This cider does 360 degrees as the flavour goes from initially root beer to apple flavours to a root beer finish all on the palate. The County Cider Company – Root Beer contains some sediment at the bottom.  First released in 2016, it made its return in 2019