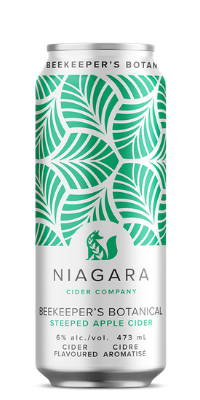 Smell: Medium aroma. Slightly pulpy and spiced apples. Mild herbiness.
Initial Taste: Medium bite. Sweet and pulpy apples appear but quickly are overtaken by slightly tangy floral and herbal notes.  Nice acidity from the apples with some mild underlying bitterness.
After Taste: Apple returns at the end of the offering as the botanicals reduce.  Less clean, with some herby notes that linger a long while. Mild honey notes peak through.
On ice: Less carbonation and less flavour.

Additional Notes:  Niagara Cider Company’s Dry Beekeeper Botanical has a lot of elements – 7 different botanicals – but none specifically stand out and rather create a unique medley flavour together. A slightly thicker, more syrupy apple that becomes somewhat acidic in nature before returning to the pulpy apple finish.  Botanicals lean more herby and punchy with hints of floral notes. 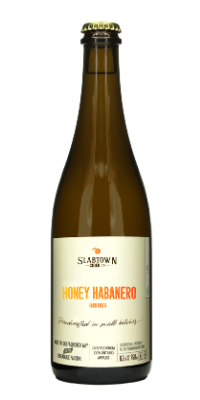 Additional Notes:  Slabtown’s Honey Haberno is a very unique creation that is not as spicy as you may anticipate when you hear habanero. The drink starts with some spice from the pepper and it does build for a bit, but is not overwhelming and not as many Scoville units as eating the pepper in a dish (by a lot!). You also get a lot of pepper flavour initially, but it turns more to a bright apple and a natural honey flavour into the finish. Surprisingly balanced for the sweet and spicy elements involved. 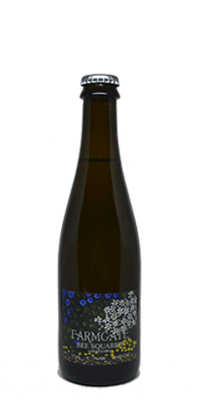 Smell: Semi-strong aroma. Sweet pulpy fresh apples with a hint of honey.
Initial Taste: Light bite from carbonation. Some pulpy dessert apples with a bit of wood-like notes.
After Taste: As apple dissipates it becomes less sweet and earthier in nature.  Honey is natural and light.
On ice: Flavour and carbonation reduced.  Honey is lighter tasting/feeling and overall is more crisp.

Additional Notes:  The Bee Squared from Farmgate is light and easy to consume, even at 7%. The honey is smooth and well balanced, and not heavy like meads can be. Initial taste is simpler, with the aftertaste becoming more complex and rudimentary, and overall more natural tasting. Becomes more sour/tart as it warms. 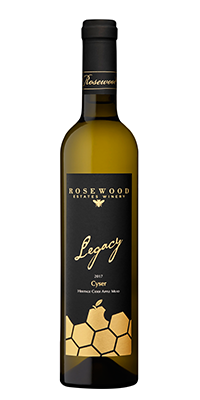 Additional Notes:  The Legacy Cyser by Rosewood is very unique.  It has a strong kick from the honey and wine elements/astringency initially, but becomes extra smooth quickly into the aftertaste. It’s sweet but not sugary, with some creamy and crisp apple elements. It lingers a long-time and is a very unique offering compared to other wine/cider hybrids. This apple mead cyser is well worth a bottle as we cannot recall seeing anything like this elsewhere in Ontario. 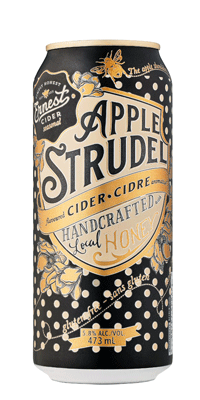 Smell: Medium aroma of caramel, cinnamon and semi-tart apple.
Initial Taste: Mild bite from acidity and carbonation. Strong, bold nutmeg flavour followed by semi-tart and warming apple notes – and some citrus aspects.  Almost a bourbon-like vanilla.
After Taste: Becomes more cinnamon and apple pie like as the aftertaste goes on. Long lasting with a bit of a film/medicinal taste.  Finished with some pastry and raisin elements.
On ice: No difference.

Additional Notes:  Ernest’s Apple Strudel has a lot of elements: it starts bold and then goes through a bit of a flavour journey with differing tastes, finishing on a flaky, cinnamon ending.  The more you consciously think of it, the closer it is to the Apple Strudel it’s named after. It would be a great alternative to a dessert as it captures the unique, flakiness flavours of a strudel. 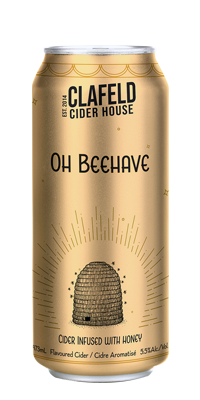 Additional Notes: Oh Beehave is a crisp and dry apple cider that features apple flavours first; with the honey flavours secondary. This cider has a rustic, countryside appeal.

Saturdays are great, especially when its a #cidero