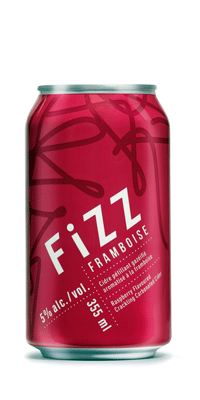 Smell: Strong aroma of sweet candied raspberry with some sour apple
Initial Taste: Light bite from carbonation. Some semi-tart apple notes followed by a quick showing of candied raspberry
After Taste: Raspberry somewhat dissipates and becomes more traditional semi-sour apple found in most Quebec ciders.  Does not linger overly long.  Some film at the conclusion.
On ice:  Carbonation and acidity is reduced.  More pop-like.

Additional Notes:  The Raspberry Fizz is a light-hearted take at a candied, sweet but not sugary flavoured Quebec cider.  It holds the base of a traditional Quebec cider (almost a green apple taste), with a medium raspberry appearance.  Quite crisp but it finished somewhat filmy. Not complex – more like a cooler in nature. Tastes very close to a Swedish Berry!